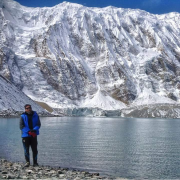 Rato Machhindranath Jatra is one of the longest chariots pulling festival of Patan with a plead of rain to fight with drought. Rato Machhindranath Jatra is the oldest and longest festival celebrated in Patan. The chariots are decorated with chaplets and other decorations. It is made of wood and bamboo. The chariots constructed at Pulchowk, Lalitpur. When the construction is completed Lord Machhindranath statue is placed in the chariots. The chariots are pulled through the town starting from Pulchowk, with a route of Natole, Gabahal, Mangalbazaar, Sundhara, Langankhel, and Kumaripati. The festival is mostly celebrated by Hindu and Buddhist of the Newar community. The festival takes place for more than one month. The Jatra ends at Jawalakhel by showing Bhoto (cloth), where the Bhoto is displayed by the head of state of Nepal.

The history behind Bhoto Jatra comes from where the farmer was gifted a Bhoto by the Karkotaka Nag for curing eye aliment for his Queen. The farmer used to where Bhoto everywhere he goes and which cause the eyes of everybody.

One day ghost saw farmer wearing Bhoto and secretly ghost began to follow farmer everywhere he goes. One day farmer put aside the Bhoto to work at the farm the ghost stole and ran away. The farmer tries to chase ghost but he was unable because the ghost was too quick. On the search for Bhoto the farmer stumbled across the Rato Machhindra hoping the ghost was there too.

Luckily he finds the ghost wearing Bhoto among the crowd and there was a quarrel between farmer and the ghost. The guards hold the fight and presented to King. The King wanted to know both sides of the story of ghost and farmers. The king gets confused whose Bhoto it was, so the King decided it would be with the priest of Rato Macchindranath. So. it is the main reason the Bhoto is shown on the last day Rato Macchindranth Jatra.